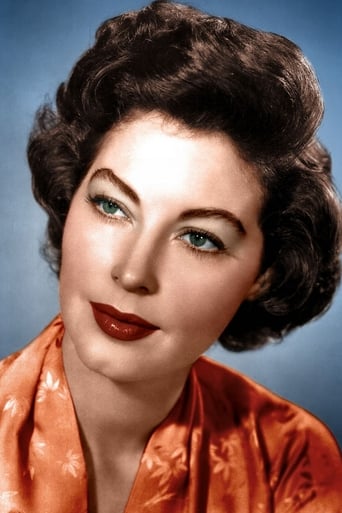 From Wikipedia, the free encyclopedia. Ava Lavinia Gardner (December 24, 1922 – January 25, 1990) was an American actress. She was signed to a contract by MGM Studios in 1941 and appeared in small roles until she drew attention with her performance in The Killers (1946). She became one of Hollywood's leading actresses, considered one of the most beautiful women of her day. She was nominated for the Academy Award for Best Actress for her work in Mogambo (1953). She appeared in several high-profile films from the 1950s to 1970s, including Bhowani Junction (1956), On the Beach (1959), The Night of the Iguana (1964), Earthquake (1974), and The Cassandra Crossing (1976). Gardner continued to act on a regular basis until 1986, four years before her death of pneumonia, at age 67, in 1990. She is listed 25th among the American Film Institute's Greatest female stars. Description above from the Wikipedia article Ava Gardner, licensed under CC-BY-SA, full list of contributors on Wikipedia​