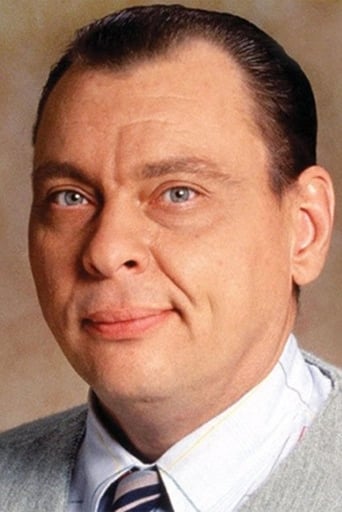 Larry Richard Drake (February 21, 1950 – March 17, 2016) was an American actor. The son of Lorraine, a homemaker, and Raymond Drake, a drafting engineer for an oil company. Drake is renowned for his portrayal of developmentally disabled Benny Stulwicz on the television show L.A. Law from 1987 until the show's end in 1994, for which he won two consecutive Emmy Awards (1988, 1989). He returned to the part of Benny in L.A. Law: The Movie, a "reunion" movie aired on NBC in 2002. Drake has appeared in numerous television and film roles, including: Time Quest, Dark Asylum, Paranoid, Bean, Overnight Delivery, The Beast, The Journey of August King, Murder in New Hampshire, Dr. Giggles, Darkman, Darkman II: The Return of Durant, The Taming of the Shrew (1983), American Pie 2, and Dark Night of the Scarecrow. He was also a regular on the 1998 science fiction TV show Prey. Drake provided the voice acting for Pops on Johnny Bravo. In 2007 he co-starred in the made for TV movie Gryphon, a Sci-Fi Pictures original film. Drake married actress Ruth De Sosa in 1989; they divorced in 1991. In October 2009, he married horror writer and model Marina Drujko, but later they divorce in the same year, 2009. On March 17, 2016, Drake was found dead in his Los Angeles home at the age of 66. Drake's manager, Steven Siebert, reported that the actor had some health problems in the months before his death. It was later reported that Drake suffered from a rare form of blood cancer that caused his blood to thicken. Description above from the Wikipedia article Larry Drake , licensed under CC-BY-SA, full list of contributors on Wikipedia.