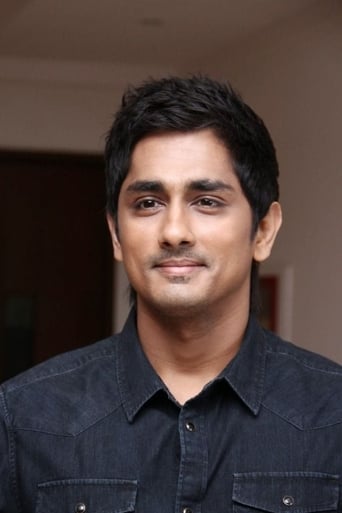 Siddharth Suryanarayanan mononymously known as Siddharth, is an Indian film actor, playback singer and screenplay writer. After his business management studies, Siddharth chose to work in film making and worked as an assistant director before making his acting debut in the 2003 Tamil film Boys. In the subsequent years, he has worked in many Telugu, Hindi and Tamil films. In the late 2000s, he established himself as a bankable lead actor in Telugu films and subsequently chose to become more selective with his projects, while also winning acclaim for his work as a carrom player in Striker (2010) and as a blind warrior in the fantasy film Anaganaga O Dheerudu (2011). In 2011, he returned to Tamil films after a sabbatical and produced Balaji Mohan's commercially successful romantic comedy Kadhalil Sodhappuvadhu Yeppadi (2012). The actor then had a prolific year in 2014, winning critical acclaim and box office success for his two ventures; Jigarthanda and Kaaviya Thalaivan. Siddharth married Meghna on 3 November 2003, after the pair had fallen in love growing up in the same neighbourhood in New Delhi. However, by early 2006, the pair were living separately, and subsequently secured a divorce in January 2007. He has been described as one of the few actors in India who is able to achieve pan-Indian appeal.