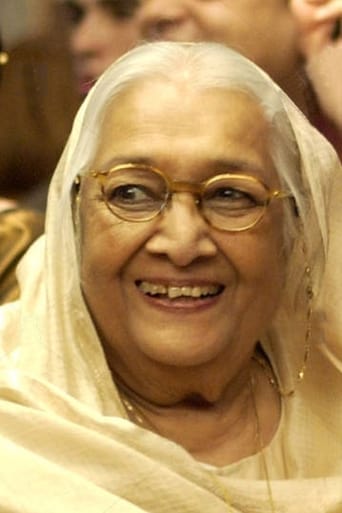 From Wikipedia, the free encyclopedia. Dina Pathak or Deena Pathak née Gandhi (4 March 1922 - 11 October 2002) was a veteran actor and director of Gujarati theatre and also a film actor. She was also a woman activist and remained the President of the 'National Federation of Indian Women' (NIFW). A doyen of Hindi and Gujarati films as well as theatre, Dina Pathak acted in over 120 films in a career spanning over six decades; her production Mena Gurjari in Bhavai folk theatre style, ran successfully for many years, and is now an part of its repertoire. She is best known for her memorable roles in the Hindi films Gol Maal and Khubsoorat. She was a favourite of the Art Cinema in India where she essayed powerful roles in films like Koshish, Umrao Jaan, Mirch Masala and Mohan Joshi Hazir Ho!. Her notable Gujarati films were Moti Ba, Malela Jeev, and Bhavani Bhavai while her well-known plays include Dinglegar, Doll's House, Vijan Sheni and Girish Karnad's Hayavadana, directed by Satyadev Dubey. Description above from the Wikipedia article Dina Pathak, licensed under CC-BY-SA, full list of contributors on Wikipedia