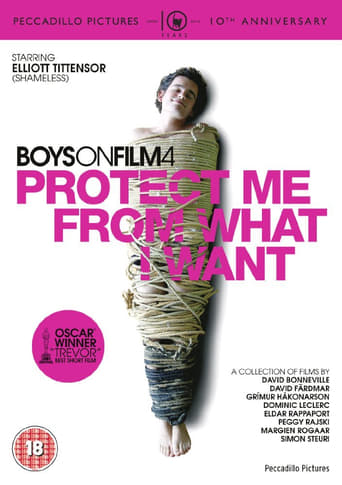 Elliot Tittensor (TV s Shameless) stars as Daz in headlining film PROTECT ME FROM WHAT I WANT, a gripping British film debut that sees him woo a young lad in an underpass, only to be threatened with a break-up the following morning. Passive and submissive roles are tackled and tugged in gay graffiti tale VANDALS and Icelandic grapple-fest WRESTLING, while POSTMORTEM, MY NAME IS LOVE, and Iris Prize winner STEAM look at promising encounters that turn awry. Rounding out the collection are HEIKO, an alternative ode to foot fetishes, BREATH where 12 year old Erik swims out to sea to make a daring move on his best friend s father, and the crème de la crème from this collection TREVOR, which won multiple prestigious awards from Sundance, Teddy Berlinale and even The Academy Awards (Oscar) for Best Short Film.