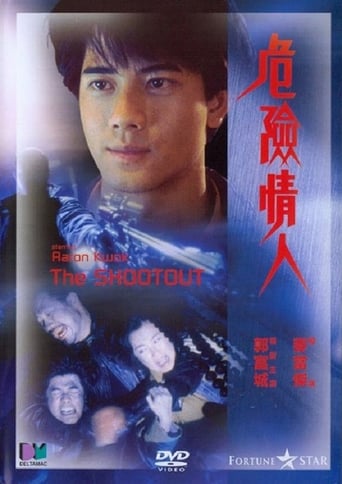 The Shootout is an early-nineties action comedy that brings together many stars of past and present Hong Kong films. Popstar Aaron Kwok is Fai, a relatively young, inexperienced cop who accidentally nabs a member of a thievery gang. However, Fai loses his collar when the gang's vicious boss (Elvis Tsui) infiltrates Police HQ to take down his own comrade! Luckily, the cops bring in two "expert" policemen, Lau (Sean Lau Ching Wan) and Ma (Leung Ka Yan) to help nab the bad guys. Helping their investigation is Min (Fennie Yuen), the club singer to whom Fai is attracted AND the girlfriend to the head bad guy. With topnotch police work - and maybe a little luck - the cops regroup in time for a violent finish. Gritty violence and entertaining, over-the-top action highlight The Shootout, but it's the charismatic stars and quick-footed comedy which keep things amusing.